We would be in Cambodia for all of 5 days; in Siem Reap, and more specifically to visit Angkor Wat, another bucket list item. We were not disappointed. It was fascinating to witness the “rawness” of the temples that were overtaken by jungle. These sites aren’t polished and restored like in a lot of other countries. Clearly there’s some restoration ongoing, but we feel it’s smart to preserve those signs of the times. As we have now visited Maccu Picchu, Easter Island, Angkor Wat, Athens etc it is so impressive to realize what these civilizations accomplished. 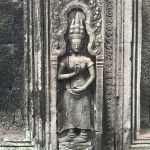 We loved the Cambodian hospitality. Honestly, everyone we met was nice and welcoming. Our days revolve around food, and our first day we wanted to go to a traditional Cambodian restaurant. But Songkran was still going on here, and so a lot of places were closed. (Yes, we got soaked here too – just random folks spraying us from the back of their truck. Luckily, all it took was raising our arms up in a gesture of surrender, and we would be spared). We ended up in “Himalayan Kitchen” – and oh my, the food was so so (so!) good! I have loved exploring different cuisines on our trip, and it’s been fun to watch how the boys gradually have become more adventurous eaters. (Not Elyse off course; she gagged at the sight of a white bean over lunch just now). On our way home I stopped to get a pedicure at MC Spa … I wanted to go for the full ‘sjebang’ (massage, …) but they asked whether I was sure I had enough time – quoting about 4 hours. I have no idea how a pedicure can last 4 hours… So I went with the “regular” one – which still would be 90 minutes but lasted for 2 hours. Hu?!? Well, this must have been the most precise, meticulous and precious pedicure I ever had. I kid you not that the nailpolish remainded impeccable for 2 months straight. (Not sure how healthy that is for the nails, but that’s a whole other dilemma :)). Price tag 8$… 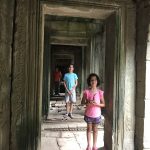 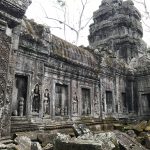 Our first day we opted for the “small circuit”. (The temples in the area are roughly laid out in a small and larger circuit and you typically take a day for each). We booked a guide through the hotel as we love having a guide with us to point out relics, to tell stories and to keep us engaged. This guide however spoke relatively poor English, and he went on and on and on about the Chinese tourism and their money flowing into the country. He was not at all happy with either. Although we appreciated the context, (and he gave lots of examples of what can and can’t be done in Cambodia in terms of setting up businesses), after a couple hours of the same message we grew a bit wary. We focused on 3 temples or ‘wats’ that day: Angkor Thom and Bayon (via south gate), Tha Prohm and Angkor Wat. 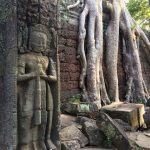 Angkor Thom is the ancient capital, with many structures, temples, palaces and libraries inside its wall. We entered Angkor Thom via the south gate, which is impressive with the statues of the gods on one side and demons on the other. We exited via the victory gate. Inside Angkor Thom, Prasat Bayon was the first site we visited. There were lots of well preserved murals with intricate details of ancient life, depicting all sorts of animals, naval battles and more. We were fascinated by the mythological stories and epic poems. Outside there was a small replica of an ancient pully, which allowed the kids to experiment with how these massive blocks of stone were moved and placed. Excellent field lesson :). Check out their traveling trio video! We also walked across the Terrace of the Elephants (which I thought was because this is were elephants were held captive – but in reality the murals simply depict elephants) and the Terrace of the Leper King (which I thought was Leopard King, a kind of name signaling strength and grace – unfortunately not; he had leprosy, hence the name!). What struck us here too was the enormous amounts of trash everywhere – apparently a bit a-typical, and left-over from the Songkran festivities the previous days. It would get cleaned up, but it looked like that might take a while! Did I mention it was a trillion degrees? And I had to cover up. I was not a happy camper in my black long travel trousers and long sleeved heavy cotton shirt. 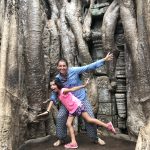 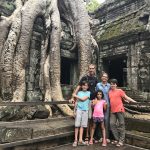 Next stop was Tomb Raider’s Ta Phrom. We got so confused between the different periods of Hinduism and Buddhism that alternated throughout Cambodia’s ancient history under different regimes and rulers, with accompanying changes to temples and decorations. Our guide was not really able to keep it all straight :). Fact is that most if not all Buddhas had been removed from the site, or beheaded. But still, Ta Phrom is super cool! While the kids whined at Angkor Thom (soooo boooooring! soooooo hot!), this site could hold their interest. It is amazing to see how the jungle has overtaken and overgrown the ruins. Part of Ta Phrom is undergoing restoration, lead by a multinational team. It’s not hard to imagine the splendor of these temples … the entire place was decorated with giant gemstomes; emerals, rubies, diamonds, … The wholes of where they used to be are still visible. It must have been marvelous! 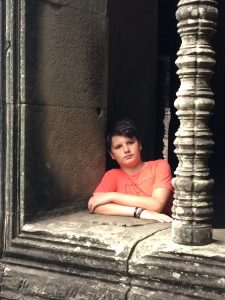 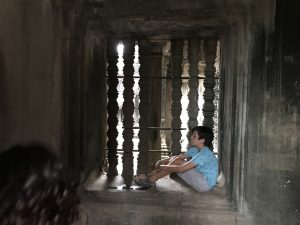 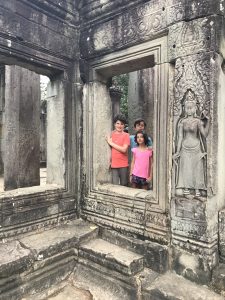 Our last stop for the day was Angkor Wat – the city of temples (thr word Angkor stands for city, and Wat for temple). This is said to be the biggest temple structure in the world. Throughout you can find buddhist and hindu references, with the hindu triumvirate sprawled across; Lord Brahma (creation of the universe), Lord Vishnu (maintaining the universe) and Lord Shiva (destruction of the universe). Ankgor Wat was originally built as a Hindu temple dedicated to the god Vishnu, by “my king” Suryavaman II. There were a lot of kings called Suryavaman … so between number 2, 5 and 7 we couldn’t keep anything straight. What I did appreciate is how the Cambodians talk about these ancient rulers as “my king”. Traveling through Asia also made me realize just how little I remember from our history classes, or better, how little of our history classes focused on global history. In Asia also there has been constant conquering, war and re-conquering – just as in Europe. It’s just not at all familiar to us. 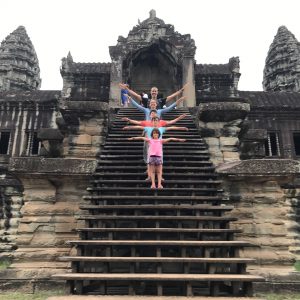 On the steps of Angkor Wat 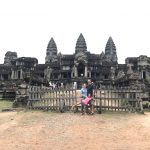 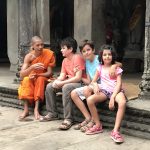 The ground plan of Angkor Wat is apparently quite special, as it is both a mountain temple (with multiple layers towering into the sky) and a galleried temple. The central mountain temple is said to symbolize the holy mountain of Mount Meru. The complex also faces west while most other temples face east, but there’s no solid explanation why. While started as a Hindu temple, it was later converted to a Buddhist temple. There were not too many statues of Buddha left, and barely any heads. Apparently those were stolen by Thai art thieves in the 80’s and 90’s, according to our guide. As this point of our trip, I wasn’t sure I should believe him or not! These temples have survided the test of time mostly because of their building structure – the walls are made of strong lave stone, filled inside with a mixture of sand and clay. On the outside, a thin layer of sandstone, ideal for carving and decorating. Across all those temple visits, our kids learned one new word: “quincunx”! 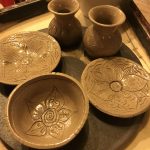 Even though this was “only” one day of temples, our kids could not face another one. Balinese, Thai or Cambodian temples; it’s all the same to them! We decided to mix it up and change our schedule. Day 2 would be a “no temple day”. We took a pottery class at Khmer Ceramics that was a-ma-zing. Maybe one of the activities we have appreciated the most in our entire journey. The center is run, and classes taught by, mute and deaf staff and that made for a very serene atmosphere. We each got to make and decorate a different couple vases, that then would be baked and glazed after our visit. I think these will proudly stand on a shelf in our kids’ rooms! 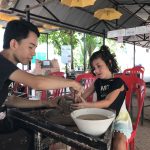 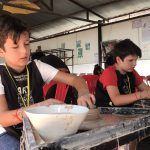 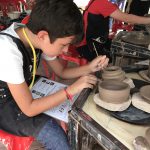 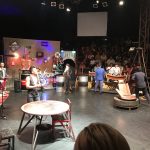 That night, we had tickets to go see the Cambodian Circus Phare. Their show ‘Khmer Metal” was super entertaining and funny. The décor is a bar, and the storyline about .. well, love. Read a couple reviews on Tripadvisor. I can hardly believe some call the show inappropriate, or inappropriate for kids. You see what you want to see, I guess. We highly recommend the show, kids included. Not in the least because the proceeds are all used to educate Cambodian children in the arts – circus, but also digital animation, music, graphics etc. It is worthwhile, as all intellectuals and artists had been brutally murdered not even 50 years ago. It will take the country a long time to recover. 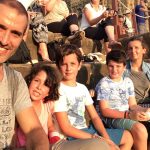 Ready for that sunset!

So then, day 3 .. return to the temples (with a vengeance!). We skipped a guide this time, and just hired a tuk-tuk driver to take us around. It was mostly overcast and thus not so scorching hot. We also went a little later in the afternoon as we hoped to catch the sunset over East Mebon; in all guidebooks described as spectacular. We all loved this day more – just because these temples are less visited, and we had some of them almost to ourselves. Preah Khan was our favorite, by far. For sunset, we headed to Prea Rup. We had heard that Phnom Bakheng is where most people go to see the sunset, but it would be a 20-30 min uphill climb and apparently “a circus” at sunset. We were not up for it. So Prae Rup it was. A mountain temple, and we took our seats on the many stairs, which gradually filled up with more and more tourists. We were there about an hour early, but as time went by, the sun dipped behind a thick layer of clouds and it was clear the sunset that evening wouldn’t cast its famous red glow. We called it a day and left early. 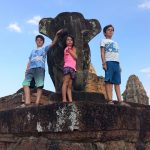 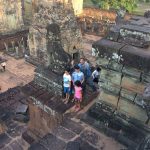 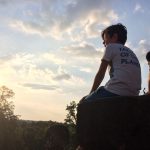 The next morning, I took off to go to Japan, to hike a small portion of the Nakasendo trail with 2 dear friends, Anke and Tamara. I was so super excited! (A break from our break…) 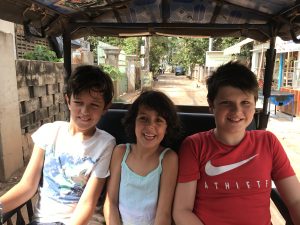 On Steven’s way out, they got stranded at the airport for a couple hours. Steven had the visa’s for Vietnam all sorted, so he thought. But turns out the visa spelled the kids’ middle names in its entirety (eg Vincent Mark Julien) whereas their passports only have the initial for the 2nd middle name (so Vincent Mark J). BIG problem, and he was not allowed to board. This was a weekend day, so he could cough up quite a few extra dollars to have new visa’s processed with extra-super-incredibly-urgent-serivce, and buy new flight tickets. He barely made it onto a flight that day. Hey, it happens….

Next up … Ho Chi Minh, one of my all time favorite cities (although I can’t quite articulate why). I would miss out on Saigon, as I would be in Japan, but I hoped Steven and the kiddo’s would love it as much as I do. Stay tuned!

As always, for our fellow travelers, including a list of place where we stayed, ate or played:

Where we ate (only mentioning the ones we loved!): 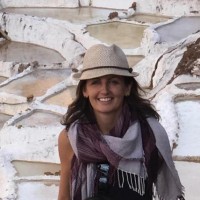 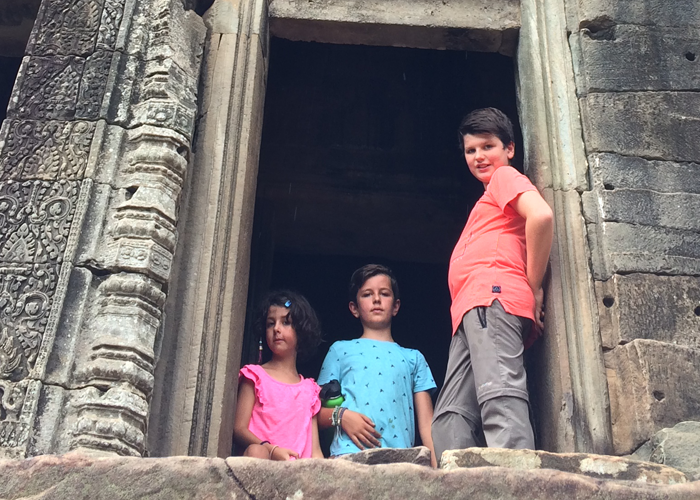 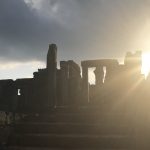