I never knew there was a world out there to discover. Graduating from college, I had never heard of a “gap year”. I grew up in a hard working family, at times struggling to make ends meet. So I worked hard too and my job had us venturing further and further from “home”. (Where is home anyway?). We got married, moved overseas, had a baby. We moved “back” to our neighboring Holland (definitely a culture shock too!). Had 2 more babies. Moved continents once again with our 3 bambinos in tow. I guess we are no strangers to starting over, settling in, making friends, making a home.

And then … I turned 40. You see, my father was diagnosed with leukemia at 39. Through my teenage eyes, my dad had lived a full life with capital L. But did he? And would I say the same of my own life? At the most random moments, I’d wonder … “what would I do if I were given only a handful of years?” An impossible question, but a persistent one. (I realize how fortunate we are that it’s a mere hypothetical question).

A couple of years ago, I stood in line at the airport of Colombo; with a ridiculously young, tanned, backpacked and flip flopped couple in front of me. I felt struck by lightning as I quietly observed them. In awe. I had this overwhelming feeling that I had lost something that I never even imagined I wanted. This mantra turning in my head “Had I known, Had I known, Had I known”. If only I had known that traveling was a possibility… With 3 kids and a flourishing career, I felt that carefree ship had sailed forever. No turning back time. I felt tied down somehow and that feeling never left me.

Until that night we were stranded in an undefined hotel room in San Francisco on our way home from an amazing but frantic trip to New Zealand last year. It dawned on me: it’s now or never. Not sure why. But I’ve never felt so certain of much in my life. This is the answer to my life question.

We are going on a Trip. 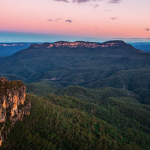